As a 2017 profile of Murdock Hall at Massachusetts College of Liberal Arts (MCLA) on hercampus.com entitled, Some History: Murdock Hall, the cradle of MCLA, mentions, “MCLA boasts 1894 as its official opening date, but if you were to travel back there, you would see more of the town of North Adams than school buildings. In fact, the only recognizable building you would find would be Murdock Hall, the oldest and only building that still stands from North Adams Normal School…From the very beginning, the small school was committed to training teachers, as its first educational program was a two-year diploma program. When Murdock Hall, under the mantle of North Adams Normal School, graduated its first class, totaling 53 new educators, one of the future college’s longstanding traditions was started; planting ivy at the base of the school, a tradition that is still acknowledged to this day…Murdock Hall got its name from Frank Fuller Murdock, North Adams Normal School’s first principal, who took on the role for 25 years of his life…Through the decades, Murdock Hall has been repurposed multiple times.”

The Dobbert Companies also started in North Adams, and our team was excited to work on a project so central to the heart of downtown!  We implemented the fire protection, HVAC, and plumbing systems during a major renovation of Murdock Hall. 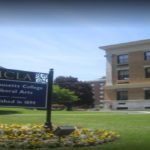