The Sea Street Pumping Station is the municipal sewer pump station that serves all of downtown Nantucket.  As a 2016 article in the Nantucket Inquirer & Mirror points out, “Every toilet, sink, and shower in the downtown area, as well as Monomoy, Hulbert Avenue and portions of mid-island flow downhill to a nondescript brick building on Sea Street just feet away from tennis courts of the Nantucket Yacht Club. Once that flow arrives, three massive pumps shoot it up to the Surfside Wastewater treatment plant…’One point three million gallons a day, right through here,’ said Department of Public Works employee Ardis Gary during a tour of the facility, which was built in 1920.”

In 2016, the Town & County of Nantucket identified that this station was in need of a major upgrade.  The Dobbert Companies was selected to install and update the HVAC systems for this important project.

Robert B. Our Company, Inc. 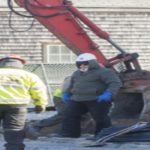